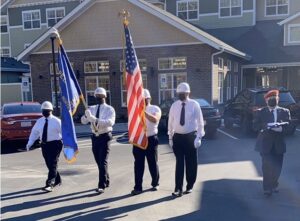 Yes, Chapel Hill Post No. 6 has an Honor Guard and it performs at the post, within the district, and, soon, competing in the state for special recognition.  Here is a sample of current activities.

On Saturday, January 9th, 2021, the American Legion Chapel Hill Post 6 Honor Guard Team, commanded by Lewis Atwater, performed its first presentation in the community. It was an honor to share our wonderful Honor Guard with the Azalea Estates retirement community  as they celebrated their Grand Opening and Flag Raising at their new facility located on Estes Drive in Chapel Hill.

As guests of honor, the Post Honor Guard began their afternoon with a delicious lunch that was prepared by the estate. The ceremony began at 1400 hours with military music playing softly as the audience came out of the center to witness the dedication of the center’s flagpole and flag.  There was excitement and an air of eager anticipation as everyone patiently waited for the clock to strike 1400 hours.

Just as everyone who has served remembers, promptly at the appointed ceremonial hour, the Honor Guard called their formation to attention and stepped out.  It was a sight that brought memories of long ago, thoughts of family and friends, and thoughts of those who served–a few eyes welled up, too.  The Honor Guard flawlessly took measured steps as they marched around the parade area carrying their Post Colors and the new center’s inaugural flag.

Post members stood nearby and watched their team stepping proudly in their American Legion uniforms.  They stepped as one–they were especially mindful of their mission and that they were representing Post 6 and the American Legion with excellence.

Military march music filled the air as our veterans, other veterans, and the residents enjoyed the sounds of “Reveille” and The Stars and Stripes Forever.  As the Honor Guard marched to the beat, the residents were applauding and smiling.

The formation halted and members of the guard silently moved with precision to the flagpole.  As the flag climbed the pole, there were an additional thirteen veterans in the crowd standing quietly at attention.  You could see how moved they were to be present for the dedication and to be recognized by Azalea Estates’  Assistant Manager, Bruce Boyd.

Along with retirement community residents, there were numerous Legionnaires and Auxiliary in attendance to support our Honor Guard. They were Kathy Ladd, Andy Scheuermann, Pete Peterson, Linda Rigsbee, Ed Gill, Regina Merritt, among others.  We thank all of you for your support and we look forward to our Honor Guard performing more across the state. 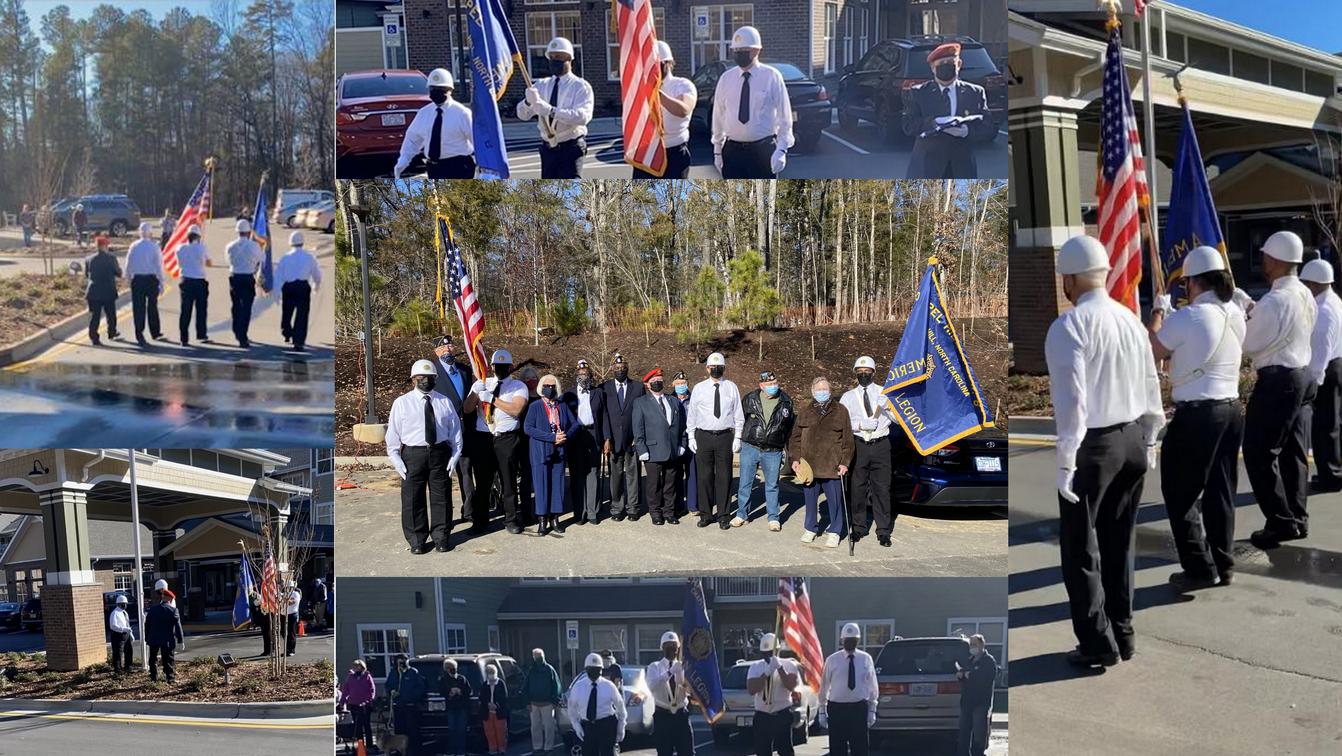 The Honor Guard accepts donations and honorariums, in addition to memorial gifts to honor a veteran.  You can send your donation to the post at: