We have been around for 93 years and there are few living members of the chartered post.  However, we are indeed fortunate to have Frank Horner, a  Past Post Commander and a 59-year member! 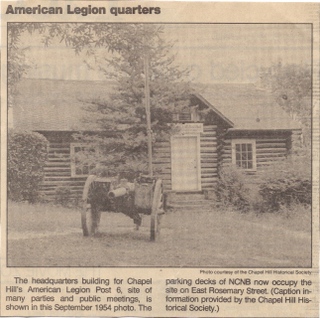 Frank is very proud of his dad and has shared some of the stories about his father, Dewey Maine  Horner, Sr., and the other early members of the post.  They built the first log cabin post on Rosemary Street.  Here is what we have learned about Dewey from his obituary:

“American Legionnaires around here speak of Dewey Main Horner with a certain awe.  They speak of him with affection and with sorrow at his death last week.  But the dominating factor  in most memories of Mr. Horner is the American Legion.  He devoted a good part of his life to it

A former Department Commander of the Legion said he believed that Mr. Horner had adopted the Legion constitution as part of his religion, and the time and effort and just plain elbow grease Mr. Horner gave to the Legion would certainly bear this out.

He was a charter member of Chapel Hill Post 6, which has a picture of him burning the Post’s (original) mortgage.  In the years since the Post was formed he held countless committee assignments, Post offices, and District offices.  He was a member of the 40 and 8, the Legion’s honor society, but regardless of honor his brother Legionnaires remember him as a man for whom no Legion task was too menial.  He was a rarity.

Outside the Legion, his work in the University buildings department was much the same: steady, responsible, unwaveringly reliable for 43 years.  Outside of that, he was a good-natured man who liked to fish and rarely did anything to excess.

An interesting thing about Mr. Horner was that unless you happened to know him, you hardly ever heard of him unless his name got a passing mention.  “For the good of the Legion,”  he used to say.  It was a pet phrase.  But it never gained him any fame.  It only gained him memorability–a difficulty, but enviable distinction to have achieved.”

We are honored to have had Dewey Horner as a founding member of our post.  Much that we have today–our 35 acre site, fishing pond ,  post hall, and post history, are all part of his legacy.  What we have today is possible because of his foresight, love for the Legion, and for his community.