We have been reading some interesting things about the American Legion in Chapel Hill over the past several years.  We have heard stories about our aged facilities, dying veterans, folding up (our tents) and heading out, or even leaving Chapel Hill.   It is like some of our neighbors are writing and talking about the veterans of Chapel Hill without reading their “book”–their history. Worse yet, few have spent time with our veterans asking questions, offering assistance, or inquiring about the American Legion. 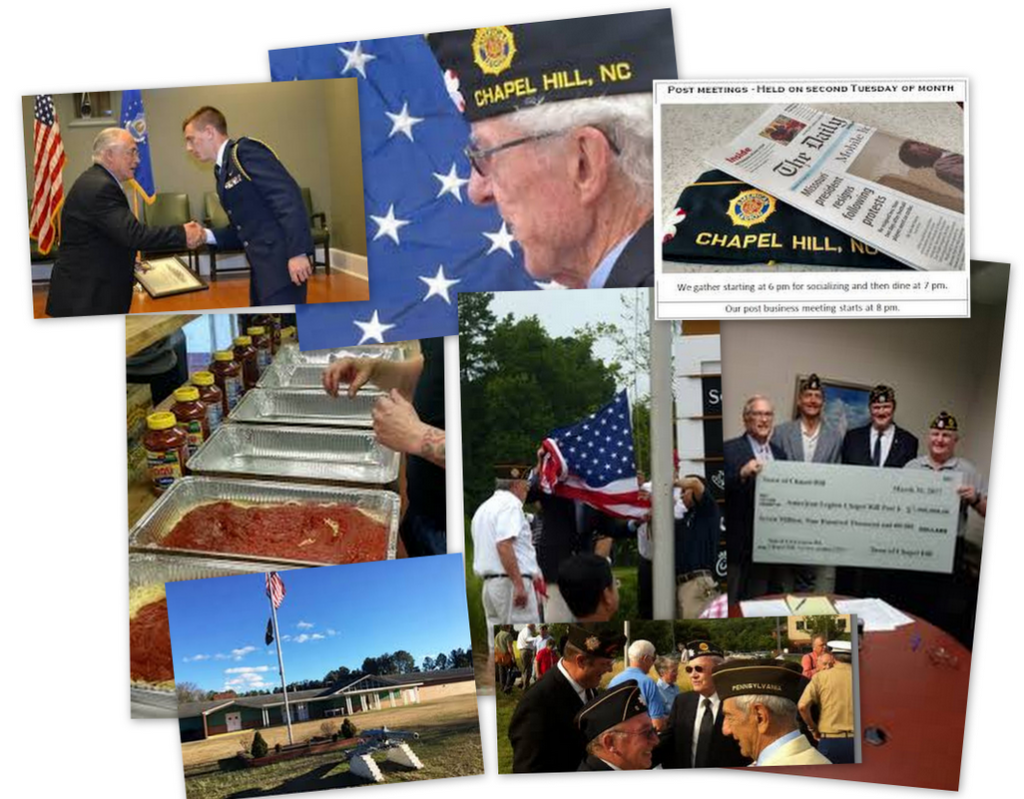 The Post members continued their Post revitalization program quietly and purposefully.  That is what we are about and who we are.

We are not about “me.”  We are about “them”–the veterans of our community, their families, our youth, and giving back to our Country–Your Country–in grateful thanks for surviving service to our Country.

We are here, yet many of our friends from our youth and our time in service, died serving their country and did not make it home.  They are the “them” in our stories.  Those who did make it home and found their way to Chapel Hill, made a difference.

Be it World War I, when over 2,000,000 doughboys and nurses headed to Europe as the American Expeditionary Forces, or World War II and Korea when just about every “able bodied” man enlisted or was drafted.  We served.

No, not everyone went overseas.  There was a lot to do between here and “over there.”  Thousands of people built Army Training Camps like Camp Butner, Camp Drum (NY), Fort Dix (NJ), and hundreds more almost overnight.  They did the same for the Navy, the Army Air Corps, and the Marines.  At the University of North Carolina at Chapel Hill they formed the V-12 Program.  The V-12 Program provided pre-midshipman for training in naval aviation and combat service world-wide.

Industry converted from building for industry to defense.  We built planes, tanks, guns, bombs and ammo on manufacturing lines that made cars, sewing machines, typewriters, and fabric.  Even Carrboro made munitions across from Fitch Lumber in the then Durham Hosiery Mill No. 7.

Through the last one hundred years, Chapel Hill Post No. 6 membership rolls included generals and privates. They served as combat riflemen, mail clerks, ship drivers and heavy equipment operators.  They were served as Seabees, Marines, sailors, nurses, medics, and aviators.  Then they returned home.

Under the GI Bill, a program made possible through the efforts of the American Legion, they attended schools and colleges.  They trained to be commercial pilots, leaders, computer engineers, and scientists.  Some became U.S. Congressmen, Judges, doctors, and lawyers.  Others became shop keepers, auto mechanics, farmers, teachers, builders, bakers, restaurant owners, carpenters, writers, educators, dentists, and more.  Many owned and operated shops and businesses in Eastgate, Rams Plaza, downtown Chapel Hill and Carrboro.  Others built housing, factories, roadways, and more.

Our World War I members built our first Post Hut on Rosemary St. by cutting down trees by hand, splitting logs, and then building a log cabin.  Thirty years later they built our Legion Road Home.  Local veterans built and maintained both, helped local veterans, and at the same time raised their families.

Today, less than one half of one percent of our population serves their Country in the Armed Services.  Picture it.

Picture a lecture room or church seating 100 people.  Soon maybe only one of them will stand alone to be recognized as a veteran!

Yes, we have been busy during our first one hundred years, but we believe that the best is yet to come.

There are well over 500 veterans attending UNC Chapel Hill.  There are many more in and around us in Orange County.  If you are one of them, come on home to Chapel Hill Post No. 6.  Be part of our continuing legacy of serving our local veterans and our community.