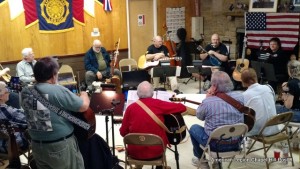 The Marathon Jam went on as planned today.  People were knocking on the doors more than an hour before the start.  They came from as faraway as Maryland and Vermont! One couple came in from Fuquay-Varina Post 116!

Musicians started unloading their cases at about 12:15 and there was a steady stream for over an hour.  Some have played about two to four hours and have rotated out.  Not to worry, more kept coming and we had to add more chairs for the jammers.

A high school student arrived with an eager smile and his guitar.  When seen, he was invited to sit in on the front row.  Life’s memories are started at a Marathon Jam.

Lots of pictures were taken and many participants were interviewed.  This includes interviews on behalf of Fisher House by Aaron Keck of WCHL.  These interviews will be heard during Fisher House broadcasts on Memorial Day.

Music started on time and has not stopped for over five hours and they will keep at it until 1 am!

There are also the usual Irish Setters, a Bischon in disguise (another pound rescue), and a smattering of other breeds.  Porch music needs a few dogs.  Too bad we did not have a hound dog to sing along.

John Santa, event producer, wrote, “… hope you’ve heard all the radio and press.
including a file with Ron Stutts in case you haven’t!  ..  WCHL has been WONDERFUL this year!”  Click on link below to hear the six minute broadcast interview with Ron Stutts.

We thank WCHL and Chapelboro.com for their awesome support!

How about you?  Take a break from the basketball slug-fest and head to the post.  Bring a few dollars to donate to the Fisher House and sit back for some porch music with friends.