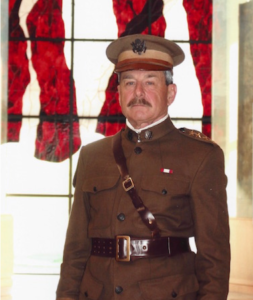 Chapel Hill Post No. 6, American Legion, is proud to join our local Army ROTC Unit at UNC Chapel Hill to sponsor  David Shuey, who portrays General  John J. Pershing.  Mr. Shuey is a professional actor,  “Historyteller,”  and historic person re-enactor. He will be speaking in the form of General John Joseph Pershing.

We look forward to what is expected to be a very interesting and entertaining evening filled with camaraderie, historical perspectives, and a better understanding of World War I  and some of the lessons of war.

The American Legion awarded its second Distinguished Service Medal to Pershing, who commanded the American Expeditionary Force in World War I.

A staunch backer of the Legion’s founding just three years earlier, he told delegates at the 1922 national convention, “I never wear any other decoration than the Distinguished Service Medal, and I would rather have it than all the decorations that could possibly be bestowed by all the kings and potentates of the earth.”

Pershing, a celebrated war hero who shared his six-star general ranking with only George Washington, seemed more comfortable as a common soldier. He pushed hard for the creation of the Legion at the Paris caucus in 1919, but resisted every effort to make him commander. He was content to be remain a member of George Washington Post 1 in Washington, D.C.

This event is open to the community and especially to local high school History AP students.

Refreshments will be available.We hope to see as many Post 6 members as possible at this “once-in-a-lifetime” event.