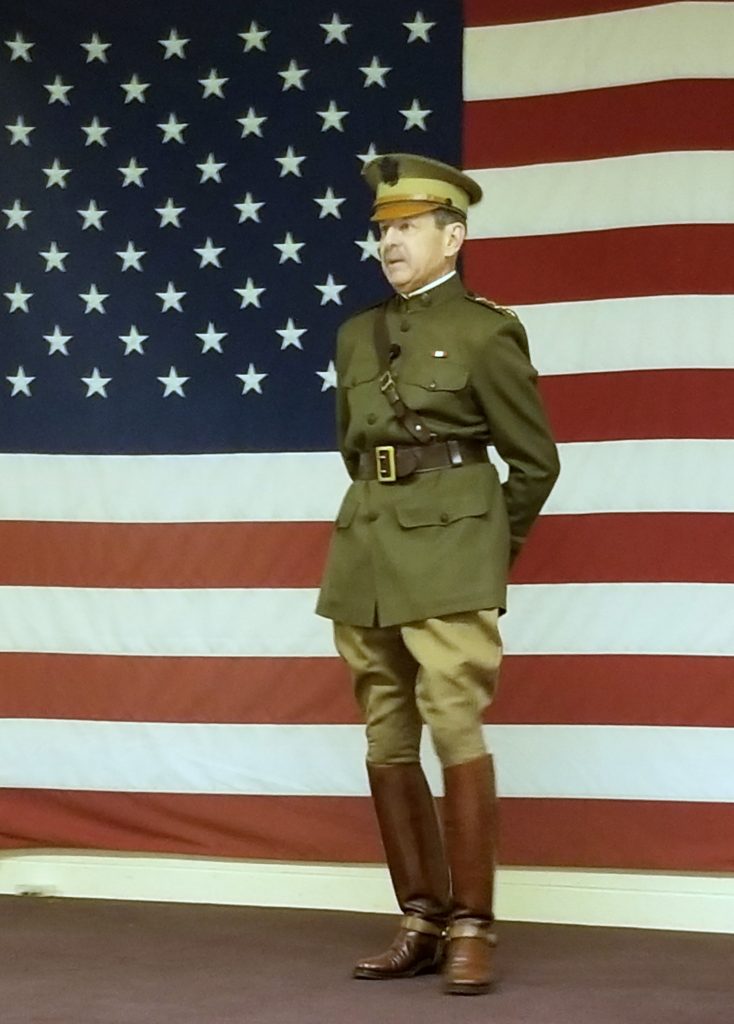 Chapel Hill Post No. 6  kicked off their Centennial celebrations by joining with their local Army ROTC Unit at UNC Chapel Hill to sponsor David Shuey, who portrays General John J. Pershing.  Mr. Shuey is a professional actor, “History teller,” and historic person re-enactor. He spoke in the persona of General John Joseph Pershing.

It was a a delightful journey shared with us as a young John Pershing described his youth, education, West Point Cadet days, his early Army career and other events that led to his command of the 10th Cavalry in October 1895.  The 10th Cavalry was one of the several “Buffalo Soldier” regiments serving in the West.  He also commanded them in Cuba where they fought gallantly on the Kettle and San Juan Hills in Cuba.  General Pershing also led his 10th Cavalry in a “Punitive Expedition” into Mexico in search of “Pancho” Villa.

“General Pershing’s” story continued through to World War I and the mobilization of 2,000,000 men and women for the American Expeditionary Force, battles in Europe, and continued service to his country.  His story was not only entertaining, but very historically  insightful.

Pershing, a celebrated war hero who shared his six-star general ranking with only George Washington, seemed more comfortable as a common soldier. He pushed hard for the creation of the American Legion at the Paris caucus in 1919, but resisted every effort to make him commander. He was content to remain a member of George Washington Post 1 in Washington, D.C.

This event was open to the community and about 100 people attended.  As an event memento, Mr. Shuey was presented with a post flag flown over the post the day of the event.

Post 6 is now building a new post home to serve as it “hut” for its second hundred years and future and current area veterans.  Completion and dedication is planned for their 100th birthday in October 28, 2019.  Learn more about Chapel Hill Post No. 6.