Our post dinners, socials, meetings, projects, and fundraisers keep our members busy. Some are even busier, because they volunteer to lead projects and programs with their church, other fraternal groups, and clubs. Still others find time to accept additional challenges that puts them “in the hot seat.” That’s those jobs where you get real busy tackling the tough jobs. Jobs that can make you wonder, “Why me?” 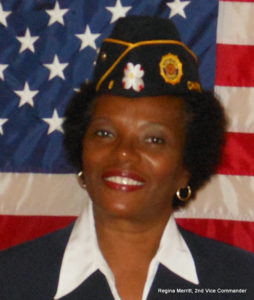 There are many, many of our members who fit this description.  This is one of their stories.  We’re putting the spotlight on Regina Merritt, 2nd Vice Commander.

Commander Merritt is “everywhere.”  She is a leader in our community and with The American Legion.  She attends many of the district, division and Department meetings and training sessions.  She thirsts for knowledge and shares her time and skills making things better for others.  In 2018, she was awarded Legionnaire of the Year, Chapel Hill Post No. 6 “For superior achievement in Americanism, Volunteerism and Service to her American Legion Post and her community at large.”

Regina Merritt is the mother of four adult children and, as she proudly proclaims, “four beautiful grandchildren.” But, a lot happened before motherhood.  Regina enlisted in the United States Army in 1976. Upon completion of her Basic Training at Fort Jackson, South Carolina, she attended Advanced Individual Training at Fort Gordon, Georgia as a Radio Operator. Her permanent stations were Fort Carson, Colorado; Fort Riley, Kansas, with temporary duty in Germany. Regina was honorably discharged three years later in 1979.

In 1981 she moved from Alexandra, Virginia, to Chapel Hill where she worked at UNC Hospital as a Pharmacy Technician.  In 1991, she opened her own business as an event planner. In 2008 the economy changed dramatically and her passion for helping others led her to work at North Carolina Institute of Minority Economic Development as a housing counselor. This was during the housing crisis where millions of people were losing their homes. This job gave her great pleasure because she was able to help so many save their homes from foreclosure. 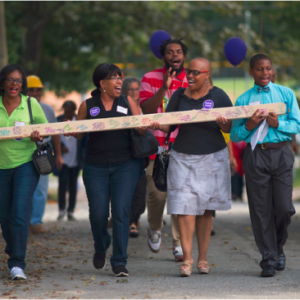 Her volunteerism was inspirational.  She was generating grants for “The Marian Cheek Jackson Center”… an organization that focuses on saving the history of Northside and Pine Knolls Community in Chapel Hill.

She has volunteered for numerous Non-profit organizations across the Chapel Hill area that include:

Here at Post 6 she has continually sought leadership positions and served as Chairman, Fundraising Committee.  She spearheaded fundraising events at Walmart Stores and at the North Carolina Basketball concession stands in the Dean Smith Center.  Her fundraising counted for a large part of our annual income that year. In addition, she served as Post Historian charged with maintaining a pictorial and written history of the Post.

And, did you know that while she was accomplishing so many things, she was attending Alamance Community College, working on a degree in Business Administration?

So, next time you see Regina at the Post, pull up a chair.  Get to know Commander Merritt.  Share with her your thoughts and trade stories.  You may find yourself excited about a new idea or project she is working on.  She is sure to ask you about your friends and encourage you to bring them to a post meeting.

Look around you, there are stories everywhere.  Make a new friend.  “We Are The American Legion!”