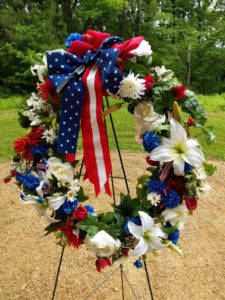 This year our Memorial Day was tempered due to the North Carolina Executive Order limiting large gatherings.  Added to that was a Boy Scout directive limiting Scout participation decorating graves.  Things were looking bleak.

Our Memorial Day “ceremonial detail” of Past Post Commander Lee Heavlin, Past Adjutant Ed Gill, and VFW Chapel Hill Chaplain Garland Neville got together and reviewed the situation and came up with a modified event plan.  Gone would be our multiple cemetery ceremonies, our annual Veterans Breakfast at Bob Evans, and our Open House at the American Legion.  Heavlin and Gill are also members of the Orange County Veterans Memorial and they, too, decided on a modified program.

Comrades Heavlin, Gill, and Neville are also long-time members of the VFW.  Their VFW Ritual for Memorial Day contains an announcement by the Post Commander, “As long as two comrades survive–so long will the Veterans of Foreign Wars of the United States render tribute to our heroic dead. … On this day, forever consecrated to our heroic dead, we are assembled once again to express sincere reverence.  This grave (monument) represents the resting places of many departed comrades who served in all wars…”  And, so, their mission was assigned. 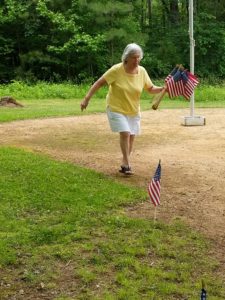 The team announced that although their program scope was limited and they could not host a large event, a ceremonial decoration of the Chapel Hill Memorial Cemetery plaza and Veterans Monument would occur.  They would also join fellow American Legionnaires Bruce Runberg, Regina Merritt, Lewis Atwater, Jim Merritt, and David Chandler at a small ceremony at the Orange County Veterans Memorial on Memorial Day, May 25th.  No publicity….  We needed to avoid a large crowd forming (about 22 people attended and kept their distances).

At 7 a.m. on Saturday, May 23rd, the VFW team formed at the cemetery with a couple of cases of flags.  They were joined by a single family of four (two patriotic parents and their daughters) and Susan Murray, a local photographer.  Three Heavlin family members also joined the group. Heavlin shared the history of Decoration Day and Memorial Day and read Grand Army of the Republic General Order No. 11 of May 5, 1868.  “... If other eyes grow dull, and other hands slack, and other hearts cold in the solemn trust, ours shall keep it well as long as the light and warmth of life remains to us.  …”

Chaplain Garland Neville read a prayer, “… As comrade after comrade departs we march on with our ranks grown thinner.  Help us to be faithful unto Thee and to one another.  …”  Yes, they were not forgotten, as our small band of brothers and families stood tall and saluted as Edward Gill played Taps.