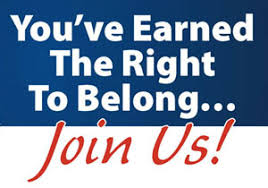 The National Headquarters of the American Legion has just announced a major change in membership eligibility.

“Congress and the White House agree to expand definition of war eras to include all who served since Dec. 7, 1941.

More than 1,600 members of the U.S. Armed Forces were killed or wounded in periods of time not designated as war eras since the end of World War II. The newly signed Let Everyone Get Involved in Opportunities for National Service Act of 2019 – The LEGION Act – honors those veterans, their spouses and descendants, extending membership eligibility in The American Legion Family to hundreds of thousands who had previously been excluded.

We look forward to welcoming those veterans who have previously applied for membership but were denied due to the earlier rules.