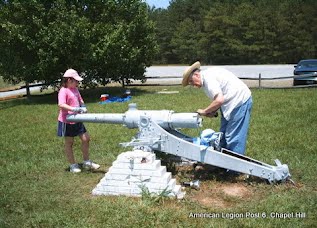 Our post cannon has been with us for many years. We date back to 1919, but the cannon goes back to the Spanish American War!

It it once had spoked wheels and stood prominently in front of our original post building on Rosemary St. We speculate that the sale of that building funded our current post building. Where was it on Rosemary Street? It is where our Bank of America (formerly North Carolina National Bank and then NationsBank) now stands. 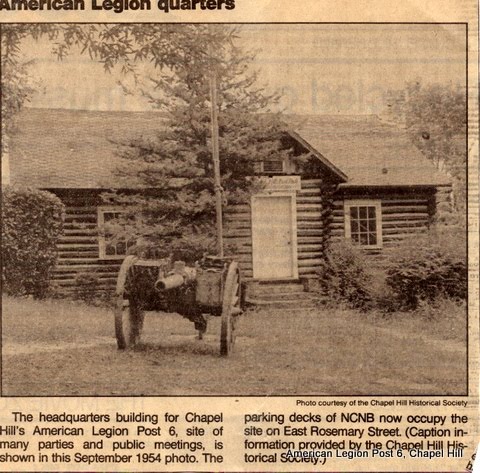 The wheels were removed and we do not know their current location. They may have deteriorated and had to be removed. The pair of matching stands originally supported ammo canisters that were seen on the cannon in earlier photos (see photo on right).

The cannon is a naval field artillery piece. It was made in 1898 and probably saw service in the Spanish-American War. The serial number, date of manufacturer and foundry are not visible. The paint covers them. We will post a copy of the stamping area before we repainted it, later.

At one time our post was offered an Army tank, but it was turned down. Why? So as to not offend the Navy! Guess they did not know the history of this military artifact.