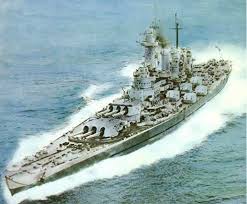 In 1946, the most decorated U.S. Navy battleship of World War II returned to her place of birth, New York Navy Shipyard, to be decommissioned.  She was five years young.

Reported by the Japanese as sunk, she survived 15 battles in the Pacific and many air attacks.  It was a torpedo that slowed her down, but she fought on.

In 1958, just a decade later, she was declared obsolete and a candidate for scrapping.  Her battle-hardened steel was to be sold.  They could not sink her in the Pacific.  She was to die a forgotten warrior berthed in New York City.  A very sad moment in a  proud lady’s life.

She was initially manned by men from the corn fields of Iowa, the plains states,  from Brooklyn, Jersey, Philly, Chicago, Seattle, Florida, Los Angeles, Oregon, New Mexico, Texas and every state in between. There were naval reservists, navy regulars, and seasoned sailors and marines from earlier wars that made up the pre-commissioning crew reporting to New York City in 1941.

At the same time, many other men were finishing up boot camp and basic training at U.S. Naval Training Centers long since abandoned themselves.  They came from training Centers San Diego, California; Bainbridge, Maryland; Norfolk, Virginia; Sampson, New York; Farragut, Idaho; Great Lakes, Illinois, and Newport, Rhode Island. All, except for Great Lakes, are now gone.  Their marching “grinders,” barracks, chow halls, medical centers, churches, staff housing, training sites, and more have been ground into the soil or hauled away to restore the abandoned training centers in preparation for housing, industrial complexes, or grassy park land.

There were officers pulled from other battleships, cruisers, and destroyers.  Medical and Dental Officers were selected.  There were also new soon-to-be officers in training at the naval academy and Navy ROTC units.

The USS NORTH CAROLINA needed about 2,339 men (144 officers and 2,195 enlisted).  It was a virtual city at sea with the comforts of home and the equipment and resources needed to feed and care for the crew, repair or rebuild itself, and the guns to defend or destroy an opposing force.

A Wilmington television station executive named James Craig, a veteran himself, is credited with saving the battleship and for bringing her “home” to North Carolina.  The News and Observer published an informative story today about the USS NORTH CAROLINA.  They shared her story and the need to raise $17 million to restore her hull and other repairs needed to protect her.  Read story

We’ll put a jar out at each meeting and event at the post.  Drop in a few  dollars or a few coins.  You can also write a check to the project to memorialize a family member of friend.

One thing that this writer has learned early in life is that no matter how tough you are having it or how little you have yourself, others having a tougher time and have a greater need.  Ease their burden a little and your problems will seem minuscule.  That is a lesson to be shared.  No donation is too small.