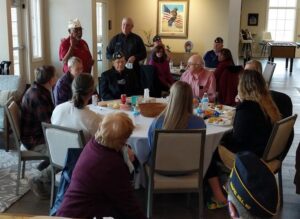 On Saturday, March 20th, 2021, the Post was honored to have the North Carolina Department Commander (James Moore) in attendance.  It was his first visit during COVID to our new post home.  In addition,  it just so happened to be Elmer Hughes’ (our oldest living member) birthday…he was also in attendance.  Commander Bill Munsee reported, “I am very confident that Commander Moore was very impressed with our organization and building, and he was surely impressed when Sarge Sweeney and Pete Peterson sang a special birthday song to Elmer Hughes. It really was a great day for everyone, and it seems like the Saturday get togethers may become a tradition.”

In addition to the visiting dignitaries and birthdays, our Post 6 Choir made its debut singing Leo Friedman’s “Let Me Call You Sweetheart.” “I think everyone will agree that for their very first performance and with a very, very, short practice time, they did a terrific job and impressed everyone in the clubroom.  I think we can expect terrific things from this group, and I would like to give a big shout out to Jack McCallus, Sarge Sweeney, Rochelle Nowik, Pete Peterson, and Trisha White. Well done!!” said Commander Munsee.

Elmer Hughes was joined by his two sons, their families and grandchildren.  On Elmer’s arrival, the Post members came to attention and the Sergeant-at-Arms struck the Post Ship’s Bell multiple times to honor Major Hughes as he entered the Post Home.

A special day deserved a special cake.  The birthday cake selected was a “Tres Leches” (Spanish Three-creams and milk cake).  It was filled with both strawberries and pineapple and elegantly topped with roses formed with colored whipped cream.  A special cake on a very special birthday.