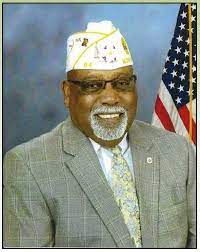 Just about a year ago, then Department Commander James Moore visited Post 6 at our Open House and Celebration of the 100th Birthday of Elmer Hughes. Now we sadly report Commander Moore’s passing this week on Monday, April 18th.

Commander Moore was the first Department Commander to visit Post 6 in many a year.  The Open House and Birthday Event was our first “fully functional event” at our new Post Home as we officially opened post-COVID.  It was an honor to host the American Legion State Commander and his staff at this very special event.

James D. Moore, a member of American Legion Post 94 in Snow Hill was elected State Commander of the 36,000 member American Legion Department of North Carolina at ceremonies in Raleigh on June 8, 2019. Moore was sworn in by Past Department Commander Richard Neville of Clayton, NC.   He was a proud Airman in the United State Air Force and Soldier in the Army National Guard, Commander Moore served in the US Air Force (Active Duty, Reserve and ANG) from 1960-1969, and in the Army National Guard (Active and Reserve) from 1982-2000. James worked for the United Parcel Service from 1969-1979.  Learn more.

Cards of condolence can be sent to his wife, Francine, and son Anthony, at the family home at: