It all began at the end of World War I when Europe was overwhelmed with doughboys waiting to embark troop ships and head home to the “U. S. of A.”  The American Legion was formed  March 1919 in Paris, France,  and Congress chartered the American Legion on September 16, 1919.  Our Chapel Hill Post was formed on October 28, 1919.

That is right.  We gathered at a convention in Raleigh earlier that year to form a North Carolina Department of the American Legion and then formed our post.  We incorporated on November 30, 1934. 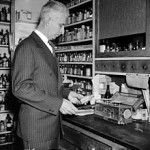 Our first officers were:

From 1919 to 1931, the post members met at many different places, including local schools.  Then in the Spring of 1931 they built our first home–a log cabin with basement.  Years later, Judge Luther J. Phipps shared his remembrances.

Judge Luther J. Phipps shared his recollection of the building of the log cabin.  At the dedication of our current post home he said, “Many of you will remember Easter Morning 1931, when we took our axes and saws and went into the woods on Carl Durham’s and Sam Durham’s properties and cut and barked the logs with which the old hut was built.  That served as the meeting place through the remainder of the depression, the New Deal, the Fair Deal, another world war, the Korean Conflict, and until recently.”

This is just one of hundreds of stories we will share as we build our new post home for “the next fifty years” and more.  You are welcome to submit a family or personal story about the American Legion in Chapel Hill, as we are now working on our 100th anniversary and commemorating the event with the dedication of our new post home in 2019.  For the next two years we will do things to build up to that special event.

Submit your stories and pictures to us by email to [email protected] or by U.S. Mail to: