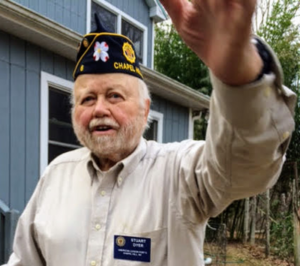 We are saddened to report that one of our World War II era veterans has passed.  Stuart Decker Dyer, 92, died peacefully at Croasdaile Village Retirement Community on Saturday, August 17, 2019.

He proudly served his country at the close of WWII in the occupying forces of the United States Army in Marburg, Germany, and later graduated from Earlham College, where he met his beloved wife, Lucy Warrick.  Most of his adult working life Stuart lived in New Orleans, Louisiana, operating his hardware supply business, Craft Sales.  Stuart and Lucy raised their four children in New Orleans.

Stuart joined Chapel Hill Post No. 6 in 2014 after serving with The American Legion North Carolina at large Post 1981. He joined us during our post revitalization period and actively participated in the many processes that led to our bold move to build a new post home to serve future generations.

Stuart’s complete obituary appears in The News of Orange County and may be viewed online.  CLICK HERE