The University of North Carolina Hospital is hosting an event to recognize our local veterans at NC Memorial Hospital the week of Veteran’s Day.  The event will be at 1 p.m. on Friday, November 9th.  Guests are asked to join with the hospital staff in the main lobby of the NC Memorial Hospital.  See map/directions 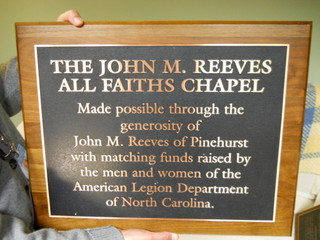 As part of the recognition ceremonies, the new hospital flag pole will be dedicated by the UNC Army ROTC unit and color guard.

Colonel Robert Bauman, U.S. Army (Ret.), and a member of Chapel Hill Post 6, will be the guest speaker.  Colonel Bauman is a long-time resident of Chapel Hill and owns BEAMCo, a local Chapel Hill Company.

Edward Gill, Chapel Hill Post 6 2nd Vice Commander, will be recognized for service to the post and community.  Edward Gill is the Department of North Carolina Legionnaire of the Year 2012.

Let’s give this event our strong support as we honor the living veterans of our area.  It was a great event last year  that was well attended.