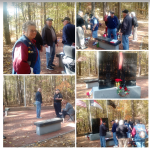 The Durham area Vietnam Veterans of America (VVA) Chapter 530 members gathered today at the Durham Vietnam Veterans Living Memorial.  It was just a few days since Veterans Day, but the members have decided that it was time to honor and remember Vietnam War dead on a monthly basis.  This was the first monthly event of many.

They stood together in a half circle, paid honors to the National Ensign, and one by one stepped forward, saluted, and read the names of four or more war dead.  Then they all saluted.  All of those recognized were recovered and returned home.  One did not and is still listed as MIA (missing in action). He is Harold Lee Harris, Private First Class (E3), US Army.  North Carolina lost 1,609 men and women in Vietnam.

PFC Harris was a rifleman on a combat mission with his unit in Binh Dinh region of South Vietnam on October 22, 1966. While attempting to cross a stream, Harris and another member of the unit were swept away by swift current, and last seen being tossed over and over by the current of the stream.

A thorough search of the area was made, and the body of the other member of the team was recovered four days later, but not that of PFC Harris. The search continued another day, and was then terminated. PFC Harold Harris was a month shy of his 20th birthday.

VVA Members came from both Durham and Orange Counties.   Many were also members of the American Legion, Veterans of Foreign Wars, and Disabled American Veterans.  Vietnam Vets are doers, contributors, volunteers, guides, and counselors.  All seem to have gravitated towards work and services that help and support others–not just veterans.  All seem to be driven to give back something to their community, for they were blessed and were among those who returned home.

If you would like to attend an upcoming remembrance at the memorial, they are held the first Saturday of each month a the Durham Vietnam Veterans Living Memorial at 600 W Murray Ave, behind Edison Johnson Recreation Center, Durham, NC 27705