There is a moment in our lives where we are called to share sad news.  Today, is one of those moments.

I am incredibly sad to share with you the loss of Major Everett “Bud” Hampton, United States Marine Corps (Retired), a native of Kannapolis, North Carolina, and a resident of Chapel Hill for over sixty years.  Bud was 97 years of age and passed away peacefully this morning at 7:30 a.m. at the Durham VA’s Hospice Center.

Major Hampton joined the Marine Corps at the beginning of World War II and served in the Pacific Theater landing with fellow Marines at one island at a time, culminating with Iwo Jima and a battlefield commission. Completing his wartime service, he returned to North Carolina and enrolled at the University of North Carolina at Chapel Hill where he graduated as the Korean War was starting.  As an officer, he was recalled to active duty and sent to Korea where he a commanded Marine force.. 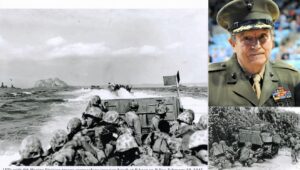 Bud seldom spoke of the conflicts he survived, but he spoke often of his pride in the Marine Corps of his Battalion in Europe.  His battalion was selected to provide the landing forces for the  Darryl  F. Zanuck’s 1962 film epic, The Longest Day.  In recognition of his support, Darryl Zanuck gifted his Director’s Chair to Major Hampton.  The chair is proudly displayed in our Post 6 museum. When Bud retired from active service, he returned to Carolina and a took a position with the University of North Carolina at Chapel Hill where he retired.

A lot of details are not available yet regarding funeral services and interment.  We do know, however,  that interment will be at the Chapel Hill Memorial Cemetery where his wife and family are buried.  We will honor Bud also at our Saturday, May 29, 2021, Chapel Hill Memorial Cemetery Veterans flag placement .  It will be during our Flag Placement Honors ceremony. The short ceremony is at 8 a.m. at the conclusion of our 6:30 a.m. flag placement.

Please keep his family in your prayers as they prepare arrangements.  A Marine Corps military honor guard is planned.

Bud Hampton was a 26-year member of American Legion Chapel Hill Post No. 6, a member of the Marine Corps League, the Veterans of Foreign Wars, a member of the Orange County Veterans Memorial Committee, as well as a supporter of area and state veterans’ programs.  Let us prepare for a strong turnout to his funeral service (date and times pending) to honor this great patriot.  Blue Caps are encouraged.